The American Legion Department of Oregon 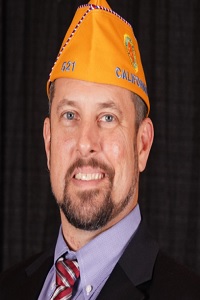 Michael Fox has been a member of the Sons of The American Legion Haggin Grant Squadron 521 in Rio Linda, Calif., since the day he was born. He grew up in the organization alongside his father, Ned, and grandfather, Ed, a World War II veteran.

At the young age of five, Fox volunteered with his father at the local VA medical center, which helped him understand the service and sacrifice of veterans. Then, at the age of six he held his first elected position at Squadron 521 as sergeant-at-arms.

“I had enjoyed myself so much I knew that this organization would be a part of my life forever.”

Fox enjoys visiting the veterans home in Yountville, Calif; several times a year, and has attended the annual veteran’s picnic there for the past 39 years. He too enjoys helping with the American Legion Baseball tournament held at the veteran’s home.

Besides his devotion to American Legion programs, Fox said his first passion in life is his four girls – Hailey, 21; twin 16-year-olds Kaci and Kali; and Skye, 12. As a single father, Fox said, “We are a close family and receive an unlimited amount of support from my parents Ned and Debbie Fox.”

Fox said his fiancé, Crystal Reagan, “is my true-life partner and greatest supporter” and has brought three more children into his life of her own, ages 23-12.

Fox has been a state certified general journeyman commercial electrician for 22 years, and works for an owner who is also a Sons member. 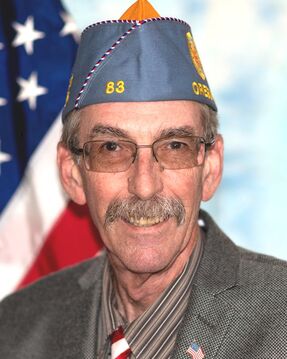 Born Dec. 29, 1952. He has three children and five grandchildren. His eligibility is through his father, a WWII Veteran, and a past member of the American Legion of Wisconsin. He grew up in central Wisconsin, attended school there, and then moved to Fond du Lac, Wisconsin, to attend college and work for the SUPERVALU grocery chain.

In 1972 he became employed by the Open Pantry grocery chain as a manager. In 1976 Carl moved to Madison, WI., to open a new store for the company and shortly after that bought his first store. In 1981 he sold his stores and went to work for the Sheraton Hotel chain doing inventory control.
In 1983 Carl became employed by the State of WI., working with individuals with severe developmental disabilities. He started working with children and progressed to the aggressive adult population.

In 1990 Carl transferred to Mendota Mental Health Institution, one of the premier mental health institutions in the country. He started working with teenagers on a forensic unit doing inpatient care, and court-ordered evaluations.
He transferred to Lorenz Hall, the first Maximum Security Juvenile Treatment Center in the country.
Four years later, he transferred to the adult Management Treatment Unit, which does court-ordered mental health evaluations and housing individuals who were unable to coexist with others.

In October of 2003, he was injured and forced into retirement.
In 2007 he married his current wife Barb and moved to Eugene, OR. In 2012. He became a member of the SAL Squadron #83 North Eugene Santa Clara in 2014, became Adjutant and Finance Officer in 2015. Elected in 2016 to become SAL Commander, his goal was to change the attitude, make the Post profitable as well.

During his tenure as Commander, he started new events, reworked old events, and developed a contract between all groups in the Post Family to divide funds from events. The results were the SAL receiving numerous awards at the convention, the National Silver Award for Child Welfare, and Post #83 receiving the Unity Award.