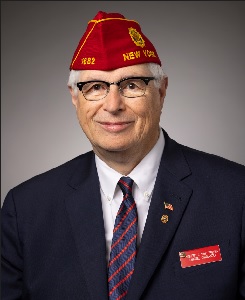 Jim grew up in Queens, New York, one of the five boroughs of New York City. His father served in military intelligence in Germany during World War II.

In 1968, Jim joined the U.S. Navy. He served onboard the USS Nitro, an ammunition ship homeported in Davisville, Rhode Island in 1970-71.  He left active duty as a Boatswain’s Mate 3rd Class and continued his service as a Naval Reservist until 1974 when he was honorably discharged.

Jim’s working career was spent in the automotive industry as a Managing Director of the service and parts departments of several large dealership groups. He retired in 2017 after spending his last ten years in a New York Metro Mercedes-Benz Dealership.
A PUFL and member of the SAL at the William E. DeBevoise (pronounced dee-bev-oys), Jr. Post 1682 in New City, New York, Jim served as Membership Chairman, Oratorical Chairman, Vice Commander, and Commander. Jim held these same positions at the County level and during his time as Rockland County Commander served on the Military Academy Review Board and the veterans advisory committee for United States Congressman Benjamin Gilman.  He served the 9th District of New York as Oratorical Chair, Adjutant, Legislative Chair, Vice Commander, and Commander.

For the Department of New York, Jim served on the faculty of the New York American Legion College, as the Department Membership Chairman, Chairman of the Centennial Task Force for the Future, a consultant to the Americanism Committee, and as Department Commander 2010-2011.

At the National level, Jim has been a member of the Membership and Post Activities Committee, the Committee on Children and Youth, the Citizens Flag Alliance, and the National Security Commission. He has served as the Chairman of the Veterans Employment and Education Commission and most recently the Legislative Commission. Jim was National Vice Commander in 2016-2017.

Jim credits much of his success in the American Legion to those in his Post who mentored and sponsored him.
Jim has been married to his wife Saveria, for 48 years. They have two daughters, Laura and Jeanette, and have three grandchildren, Alexander, 10, Abigail, 6 and Natalia, 1.
Jim currently lives in Maine, where he can be close to one of his daughter’s and his grandchildren while still being within driving distance to the Department of New York.