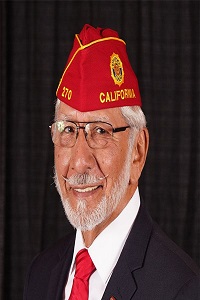 James T. Higuera of Downey, Calif., was born in Los Angeles and enlisted in the Army in 1963. Upon completing his training and security clearances, he was assigned to the U.S. Army Security Agency, 12th Special Operations Unit Kuma Station, Japan. He was honorably discharged from the service in January 1966 as a specialist five.

Higuera has been a member of The American Legion since 1966. He is a Paid Up for Life member of Downey Post 270 where he has served as commander. Higuera has served his district as chairman of various committees, elected and appointed offices, and was elected commander in 1994. Followed by his election as commander of the Los Angeles County Council of The American Legion in 1999.

He was elected department vice commander in 1996. He has served as department chairman of many commissions and committees and serves as the Ritual Chairman.  In 2015, he was inducted into Pasadena Post 13 Hall of Fame for the Sons of The American Legion.

At the national level, Higuera has served on the Trophies, Awards, and Ceremonial Committee and since 2008 has served on the National Convention Commission. In 2005 he served as president of the former National American Legion Press Association. Higuera also served as a national historian in 2010.